New Delhi: More than a year has passed since Indian Air Force (IAF) carried out Balakot air strikes across the border in Pak occupied Kashmir (PoK) on February 26, the first such strike across the border in nearly 50 years. Air strikes to dismantle terrorist camps in Balakot evoked a keen interest not only among the people but also showcased India’s air power and the capability of IAF. 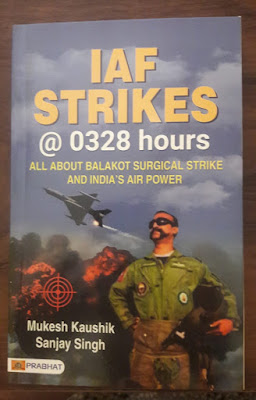 Reports in print and electronic media in the country came up with their accounts of the air strike on the basis of whatever was put out by the government at that time. Two senior defence journalists Mukesh Kaushik and Sanjay Singh have put together graphic and authentic account of Balakot air strike of February 26, 2019 which were taken up in the wake of Pulwama terror attack by Pak-supported terror outfits on CRPF convoy in which 40 para-military personnel lost their lives.

The author duo came up with ``IAF Strikes @0328 hours’’ which has a foreword penned by Air Marshal (Retd) Hari Kumar Chandrashekharan who successfully carried out the operation as the Air Officer Commanding-in-Chief of Western Air Command. Incidentally, he retired on February 28 last year just couple of days after the daring air strike.

The air strikes were carried out deep inside Pakistani territory at Jaish’s terror camp, changing the politico-strategic scenario at that time. Air Marshal’s account of the planning and implementation of the operation not only brings out facets hitherto unwritten but is also attention gripping.

On the eve of February 25 which happened to be Air Marshal Harikumar’s birthday, the IAF had organized his retirement-cum-birthday party at Akash Officers Mess near India Gate. He recalls that there was a strange wave of nationalism, suspense and adventure flowing through his body.

"The mission’s blueprint was set. You can imagine the circumstances of a man responsible for mission of that scale. My sole focus was on our targets that lay hidden in the dead of night," he recalled. Though laughter and hubbub echoes in the mess, he and the Air Chief strolled in the law outside, enjoying the pleasant weather and discussed the final preparations.

Air Marshal Harikumar was in control of the mission and reported the progress at the control room to the Air Chief who reported to the National Security Advisor who in turn kept the Prime Minister updated.

If the walls of privacy enveloped him that evening, he knew that he had to display only happiness during the party and as if it was not enough some of his friends showed up with cake at midnight at his residence. Silence from his end would create curiosity, he drove back home, met his friends, cut the cake and went back to the control room.

Young as well as experienced pilots flew 18 Mirage-2000s, twelve of these were in attack formation and the remaining six were weaponised with MISA missiles. These fighter jets took off from Gwalior in the dead of night and were to be refueled mid-air over Bareilly. Care was taken not to arouse any curiosity at ATC, Delhi. There were some key factors taken up for consideration while deciding upon the time of the air strikes, one of them was to avoid the 0400 hours Salaat-Al-Fajr prayer, second was the lunar cycle as the moon was at a favourable 30 degree angle from the horizon and the third reason was western disturbance. Air Marshal had to inform the Air chief with their pre-decided code word ``Bandar’’ (Monkey) only upon success of the mission.

The author duo spoke to a large number of their defence sector friends to help them draw a clear picture of the events that took place during that time. The 170-page volume has interesting details on why Balakot was chosen, how the Prime Minister monitored the progress and stayed up the whole night, why Mirage-2000s were chosen for the mission and the strategic vision behind air strikes.

The duo has also added a chapter on India’s quest for an indigenous Light Combat Aircraft (LCA) and how Tejas project was conceived and the progress so far which is unrelated to Balakot air strikes. Overall, the book manages to keep the attention of the reader throughout in a simple and unassuming way and comes up with a credible and authentic account of the air strikes of February 26, 2019.

Popular posts from this blog